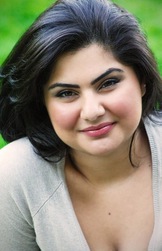 Soprano Bahareh Poureslami, is a recent graduate from the UBC School of Music, with a Bachelor’s degree in Voice Performance, studying with Marisa Gaetanne. She received the People's Choice Award at the 2012 Metropolitan Auditions in Vancouver. Throughout her high school years at Burnaby Central Secondary, Bahareh took part in the concert winds ensemble and choir, where she immediately fell in love with singing.

A student of Marisa Gaetanne, Bahareh has developed a passion for a wide range of repertoire and has had the pleasure of taking part in various ensembles including the UBC Opera Ensemble, UBC Early Music Ensemble, and the UBC Choral Union and University Singers. She has been featured as a soloist with many ensembles at the School of Music such as the Symphonic Winds Ensemble, Early Music Ensembles and in December 2012 she was the soprano soloist for Stephen Chatman’s Magnificat with the UBC University Singers and Symphony Orchestra, which will be released on CD in the Fall of 2013. As a member of the UBC Opera Ensemble, Bahareh has performed as a soloist with the Vancouver Symphony Orchestra, Vancouver Bach Choir, Bard on the Beach Shakespeare festival. She recently sang the role of  Micaëla in Carmen at UBC Opera. In 2012/13, Bahareh performed works by Mozart (Requiem), Saint Saëns (Requiem), Bach (Magnificat), Handel (Messiah), and Mendelssohn (Elijah).